#158 Trevor Snow/Darrin Jocey-Prior and #233 Graham Tickner/Bodie Tickner transversed to Mildura on Friday 8th, to have their vehicles on show and scrutineer-ed at Nowingi Place. Locals can walk around and look at the vehicles entered in the event.

Saturday morning, the competitors were up at sparrow fart to line their vehicles up ready for the reconnaissance of the Prologue track. Drivers briefing commenced at 7.20, and once this was over, the first vehicle drove away at 8.00. Dust flew up everywhere, showing just how dry the track was, and how careful competitors were going to need to be in the course of the event.

Section 1 (2 100km laps) started at 13:30, with 77 of the 80 entries away, the last vehicle off the line at 14:08.  During the first lap, 9 vehicles were out with various issues ranging from: boost leak, split fuel tank, clutch, electrical, mechanical and wheel stud, and in the 2nd lap another 15 vehicles were out with other issues, such as: cv, engine x 2, under tow x 5, missfire, lost wheel, fuel blockage, belts, rollover. The great thing about having section racing is that these teams could go back to the pits, repair their vehicles, and start again the next day. The GRKCC teams came in – #233 Tickner/Tickner  38th and #158 Snow/Jocey-Prior 46th of the 53 finishers. Unfortunately for the latter team, the engine/gearbox bay supports were broken, and they would take no further part in the event.

48 teams lined up for the start on Sunday, with #233 Tickner/Tickner in 38th position. There was not a lot of wind to blow the dust away, and in the arena, where split times were being recorded, the hanging dust made it very hard to read vehicle numbers, so it must have been very hard to see  further out on the course. All 48 teams and their vehicles finished the 1st lap, but 5  were out on the 2nd lap due to cv, axle, engine mount, fuel pump problems,  and 1 under tow. The #233 Tickner/Tickner team finished their first two laps in times of 01:20:45.860 and 01:15:29.957 and came in for a well deserved break.

Due to 5 teams competing only in the VORC section of the event, only 38 teams re-presented themselves for the start of the final 2 laps of the event. #233 Tickner/Tickner were away again, all the while moving up in position, as other teams dropped away. 2 more teams dropped out on lap 3, one blowing an engine, and one not finishing. #233 Tickner/Tickner completed lap 3 in 01:14:28.959 and kept circulating. Another 3 teams were out on the last lap due to steering, exhaust and engine issues, with one team being flagged in as they were out of time to finish the event.

Congratulations to them on a stellar effort in very trying conditions. 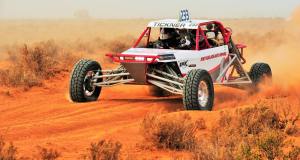 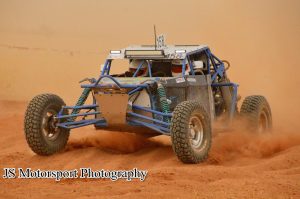 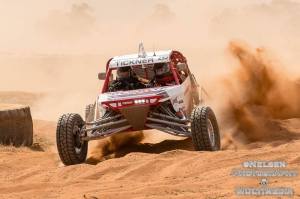